A Study in Form 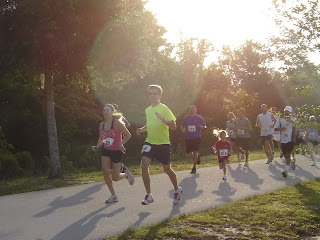 My wife got a great picture of me at my last 5k. I mean it was a great picture that I happened to be in, not that I am bragging about how I look in the picture. However, I am going to brag about how I look in the picture. It was just a few seconsd into the race (maybe a minute or two). It was long enough for me to get into the groove but not long enough for me to pull away from the pack of slower runners and firmly cement myself in the middle of the pack. The sun was just coming up over the trees which made a beautiful lens flare right above my head.

The best part of the picture was what it captured in my form - the fact that it existed. I knew it was very different from how I used to run and I wanted to quantify it. So I went on a search through my pictures from the Disney marathon to find the same point in my stride. There were 22 pictures that showed my feet. I figured one of them would be at the same point or at least close. None. Zilch. Nada. So I decided to go to the video tape and that's why I figured out why I couldn't find that position in my stride - because it wasn't there.

I don't mean that there were no pictures, I mean that portion of my stride did not exist. In my 5k pic, I am in mid air (or close to it). My back foot had just toed off (or was just about to). Going frame-by-frame through my marathon stride, that never happened. Not even in the first few miles. By the time my I was toeing off, my toe was up, heel thrusting out in that characteristic heel-striking position, and preparing to hit the ground. The reason I couldn't find a picture of me in mid-air was because I was never in mid-air.

Now, to be fair, I was running the fastest I had ever run for any mile since I PRed my opening mile in about 6:50. This would not be my pace if I tried to run a marathon today. However, I also can't discount the massive change in how I run in a mere 6 months.

So, that makes the picture my wife took extra-great to me!
Posted by THE Dogboy at 4:08 PM 2 comments:

I Am No Longer a Beginner

I was reading the latest issue of "Runner's World" when I realized I wasn't a beginner any more. Only a few years removed from my c25k and anything titled "Run Your First..." is not for me. I was excited because I'm training for my first half and this issue was all about training for your first half. The only problem is it assumes you have never run that distance. Since I already did a full, I've done that distance 9 times and since the last one was exactly double you could say I've done 13.1 10 times in the past year. Since running 13.1 isn't an issue for me, I was hoping to find some pearls of wisdom for experienced runners running their first half. No dice!

I'm not saying I know everything I need to know about running. My shins, knees, and calves give me occasional reminders that that isn't the case. However, I know everything I didn't know before I started running. That may sound obvious, but there is a finite amount of knowledge every runner must gain before they can recognize their proverbial ass from a hole in the ground. I believe I have made that leap.

For me, now, running is about putting my knowledge into action. I have my core set of running values which I follow (somewhat religiously). Having had some past success with my specific running dogma makes it a little easier to keep going. Having every run planned for me makes it easy too. I just stick to the plan and I run faster. For the most part I have remained injury free (knock on wood).

So I know something now, which is more than nothing.
Posted by THE Dogboy at 2:03 PM 1 comment: