I have to keep reminding myself it was just last year I ran the Disney full. It seems so long ago. So many runs and races have passed since then including now two Wine and Dines.

My goal when I started training for this race was simple: run faster more easily. I know that sounds obvious but up to that point I had been gutting out too many runs. My long runs were never as easy as they should have been. That goal proved harder than expected. This summer was brutally hot and my pace paid accordingly. The workouts paid off though and things did get better.

My wife refuses to run the Wine and Dine because she has too much fun at Epcot while I'm running. We had po boys from our local Cajun joint for lunch and headed to the Port Orleans French Quarter resort to check in. As I was walking to our room, I realized I had left my Garmin at home. Julie got to take a nap while went back to the house to get it. By the time my buddy Don who was running with me got there, Julie had a pretty nasty migraine. I was really bummed for her and fully expected her to miss out on the race and the party, but by the time Don and I got back from dinner at the underwhelming on-site restaurant, she was feeling better. So Don drove us to Epcot and Julie headed into the park and Don and I caught the bus to the start at the Wide World of Sports.

The starting line area was like a deck party on a Carnival cruise but with about 14,000 people: lots of cheesy dance music. It was fun though. Hit the port-o-let's a few times while we waited and then checked our bags a few minutes before we moved to the corrals.

I don't remember what I put as my anticipated time but I was in Corral A. Don (who had been battling injuries, registered late, and didn't have a "valid" qualifying time) is way faster than me but was supposed to be in F. After some serious cloak and dagger to get by 3 different checkpoints, he managed to get into A with me. Good news is he was able to start with me. Bad news is something weird happened (most likely because he started 25 min early) and he might not get an official finishing time.

Disney races are always a spectacle and there were a lot of fun costumes. I saw a few female Buzz Lightyears, lots of lederhosen and dirndls in support of the food and wine festival, and even a couple with him in suit with a fedora (with shorts) and her in a silver and black full-length gown. Standing in the corral, the emcee kept the party going playing all kinds of dance music and showing how people would run to techno, Latin, gangster rap, etc. I caught myself bouncing a little too much sometimes and worried about wearing out my calves before he race. They eventually had the National anthem, started the wheelchair race, then counted down to the start.

It was really cool to actually start at the start of this race with so many people behind me. They do shoot off fireworks for each corral so you never feel like a second-class citizen, but it was still fun to be towards the front. At first I was nervous about being in the first corral and thought I might end up going out too fast trying to keep up. That fear disappeared quickly after the start when traffic was at about a 10:00 pace. Things picked up and we picked our way through to about a 9:00 pace for the first mile. Got the pleasure of witnessing a vomiting Disney princess around mile 1 (guess she went out too fast or maybe just had digestive issues). Then Don and I did about 8:30 for the second mile which averaged out the first mile to hit my 8:45 target pace. A little later, Don found his stride and I decided to back off so I didn't see Don for the rest of the race.

All of my training seemed to point at 8:45 and that pace felt almost too easy. I took some water at the second water stop and headed into Animal Kingdom. I was concentrating on taking a good line through the winding paths of the park but tried to look good for the photographers and took note of the Tree of Life and Mt. Everest as I ran by.

At mile 5, my Garmin filled up. In the confusion of trying to run and clear the history I managed to stop my watch for about a quarter mile so the rest of my splits were off. That wasn't too big of a deal because I was a bit ahead of the mile markers from the start so then I was just a little behind. The only problem was I didn't know how far off I was from the clock time and didn't have an accurate personal time. It wasn't a catastrophe, but it was a lesson learned.

Last year there was a relay with a 5/8 split so his was he point where I started being past by people heading out for their 8 mile leg. I didn't think about it at the time but I'm glad that didn't happen his year.

Everything was still feeling really good and I hit the 10k at 54:37 (8:47 pace) which was a PR for me (I've never run a 10k so all my 10k times are for longer races). I felt like I could go faster and thought I would hold off until mile 7 and then see if I could pick it up. I had a few splits in the 8:30s so I thought that might be in reach. That feeling quickly passed as the stretch heading into Hollywood Studios was the longest of the race for me. I took my Gu at about 7.5 then headed into Hollywood Studios. I alternated water and Powerade for the race and probably only hit about half of the stops. I used the squeeze-the-top-of-the-cup technique and never broke stride.

Hollywood Studios lasted much longer than I remembered. There were several times that I thought I had left just to turn the corner and see more stuff. Seeing Darth Vader was a pleasant surprise since I had completely forgotten about Star Tours. The Osborne Family Spectacle of Dancing Lights was...well...a bunch of lights. Somewhere in there I hit the 15k at 1:22:01 which was an 8:48 pace and another PR besting my performance from Miracle Miles in September.

I finally escaped Hollywood Studios and got to mile 10 with the hopes of a push for the last 5k. Since it was a nice round number, I could do the math and knew that I was well on my way to a PR. I would push a bit and get close to 8:30 only to recover a bit and end up splitting around 8:45.

I headed up the brutal little hill over the bridge heading to the boardwalk and accelerated down like last year. I don't think I held my pace like I did then though and a around mile 12 it really started to get tough. I concentrated on my turnover, arm swing, and tried to keep my legs moving. Once again I held hopes of picking up the pace and once again just didn't have it in me.

I headed into Epcot and spotted Julie around Spaceship Earth and her cheering really gave me the boost I needed. It was the first time I ever had anyone cheer for me in this kind of race. The only other time Julie was able to cheer was for a 5k.

Heading up to the 13 mile mark they had a cool laser setup with fog that made it look like a ceiling over the path. I remembered from last year that the finish came up quickly so when I hit the 13 mark I took off. I turned the corner and went into a full sprint. I saw the clock say 1:56 something and knew I would finish at 1:55 something. I pointed to the bleachers and let out a "WOOOOOO!" like Rick Flair and sprinted across the finish line with my fist in the air woooo-ing all the way and belted out a couple more woos as I got my medal. People looked at me like I was crazy which I just don't understand. I don't know how you can finish that type of race and not be excited. I know some people were probably disappointed with their performance but I'm sure I wasn't the only person who was that happy.

As easy as my final sprint was, I keep thinking I could have gone faster but as tough as those last few miles were I think my pace was just about perfect.

I took a long time to stretch and found Don. He had finished about 5 min ahead of me. I changed, we grabbed our free beer, and headed in to meet Julie. She had grabbed some foods and beer for us so we had that and then headed for Germany and beer and brats. We rode the Maelstrom in Norway and Spaceship Earth and that pretty much was enough for the night.

I don't race often and I race long even less. My half plan takes me through 18 really tough weeks but I'm two for two in being happy with my results. This was another great Disney race experience. 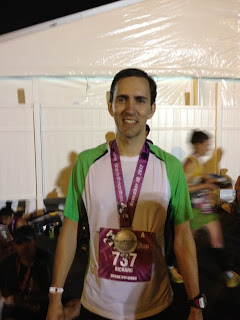 Posted by THE Dogboy at 7:26 PM No comments:

As I sat at the kitchen table this morning getting ready for my run, I picked up my phone and surfed the Internet. I quickly realized that I was delaying my run, not because I didn't want it to start but because I didn't want it to end. This was my last workout at the end of 18 weeks of training for this year's Wine and Dine half. It was 18 grouling weeks through a typical hot and humid FL summer. I ran through injury and heat and came out stronger.

The weather was perfect. 50 degrees with a slight breeze. I walked to the front of my neighborhood, stretched, and found my favorite Indie Soup Runner podcast. I started running before I started my watch. My legs just started going before my brain kicked in.

I was cruising along at quick but comfortable pace thinking about how perfectly every was going on this last run before my race. Then SMACK! Reality hit me in the face in the form of a crack in the sidewalk. My toe hit in just the perfect spot (perfectly WRONG!). Before I knew what happened my palms were hitting the ground. I quickly spotted the grass next to me, tucked my left shoulder, and rolled onto the ground. As I fell, 18 weeks of running flashed before my eyes. I imagined a broken wrist, torn ACLU, broken leg, skinned knees, but escaped them all, finished my roll, bounced up, and resumed my run.

I had run the same stretch of pavement at least a hundred times without incident. I haven't even almost tripped while running in over a year. I have run through stretches of near total darkness and done trail runs through rough terrain and didn't have a significant stumble. Then my toe meets one crack and it could have been disaster.

Posted by THE Dogboy at 5:41 PM No comments: